So, the "Last Dance" finally dropped on Netflix this April 21 in Australia. It premiered on ESPN on April 20, 2020. For Michael Jordan fans (and Chicago Bulls fans), that was a long wait. The documentary received its green light from Michael Jordan and the others, way back 2016.

Sitting through episodes 1 and 2, I have to agree that there could have been no better time to air "The Last Dance". I really missed seeing His Airness execute his majestic plays. I missed seeing that particular Chicago Bulls team playing games on screen. I had a trip back to memory lane. And it was a pleasant one. An inspiring one. There's no better distraction than to sit, listen, and stare through a motivating, confronting, and inspiring documentary.

Michael Jordan was not the number 1 pick in the NBA draft. He was number 3. We see from the documentary that the Chicago Bulls higher ups were not that ecstatic about their choice. It's like they had no other choice and that Michael Jordan was what they had to go with. (Say, "What?!")

Bernie Lincicome who clearly saw (along with sports fans who had great eyesight!) the greatness of Michael Jordan early on, reacts to Chicago Bulls management feeling stuck with Michael Jordan in the 1984 NBA draft. He wrote a well-expressed thought (eloquently capturing my, "Say, What?!") about this in his June 20, 1984 article for the Chicago Tribune. Find the original article reposted here.

In case the site pulls the article out, you can find a pdf save here.

Keith Brown, Bulls VP for Ticketing and the man who was there to represent the Chicago Bulls Management for the draft pick in 1984 recalls how Michael Jordan proved himself as the best pick during his first team practice. Here's a grab. Click image to enlarge.: 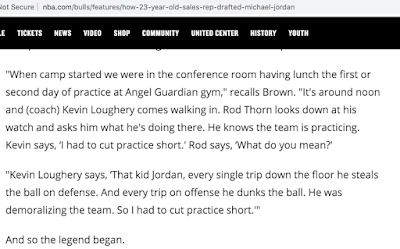 Find the complete write-up of His interview with NBA.com here.
In case the article gets pulled out, find a pdf save of the article here.

Robin Roberts discussed "The Last Dance" with Michael Jordan on Good Morning America:
Here are some noteworthy portions from this interview:
1. "You had to live life as it came. You preciously protected it. You learn the education aspect, and spending time with friends and family."

2. His dad , James Jordan, said in the documentary, "If you want to get out the best from Michael Jordan, you tell him he can't do something."

4. "Look at the negative. Take it. Learn from it. And turn it into a positive."